Menu
Browse: Home   /   What I Learnt from Julias Yego 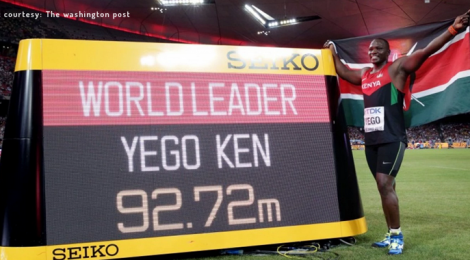 What I Learnt from Julias Yego

Let me first begin this article by really and i mean really congratulating my fellow mwananchin (citizen), Mr Julias Yego for his outstanding performance at the World Athletics Championship 2015 in Beijing,China. Man if you read this article, I say to you “Keep that fire Burning Man“.

The 85kg Commonwealth champion, who initially hoped to join the ranks of famous Kenyan runners, but i guess while he was contemplating on this, he had good wifi and was watching YouTube videos. If you think about it, which is where i really admire this man is that, in his guts he was aware of Kenya’s superiority on the track and he stood against obvious odds but chose to be different and put Kenya on the world athletics map but not on track but using the Javelin! And so he did, with no coach and probably with a few doubts here and there, he turned to the internet and begun this journey to become a world champion.

Julias Yego settled his mind on the javelin and did not look back and improved his technique after watching videos of Jan Zelezny of the Czech Republic and Norwegian Andreas Thorkildsen, who both won Olympic and world titles, [inspiration].

Yego’s story is great, laced with determination and eagerness to learn. This quality, if well harnessed will surely create new heights for anyone willing to sweat it out through practice, training  and discipline.

There is so much to say about his performance but let me just talk about his recent and most powerful performance since he begun his career, it all went down at the World Athletics Championship 2015 in Beijing China.

At 5ft 9ins, the 26-year-old is relatively diminutive in the sport, but he threw 92.72m – a Commonwealth record – to win the competition by nearly four metres. His throw of 92.72 meters is an African record and the longest throw in 14 years — easily edged Ihab Abedelrahman El Sayed of Egypt and Tero Pitkamaki of Finland, who took silver and bronze, respectively. How Cool is that!

More intriguing is his performance chart that just shows a man who made up his mind on what he want to compete in and be good at it. (see below) 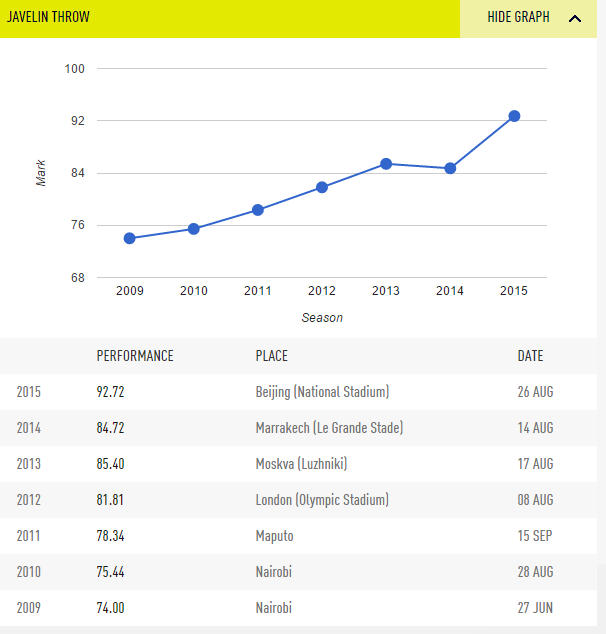 with such kind of performance and thanks to his Finnish Coach who identified this talent and did not hesitate to help this young man meet his dream head on, thank you coach Petteri Piironen. 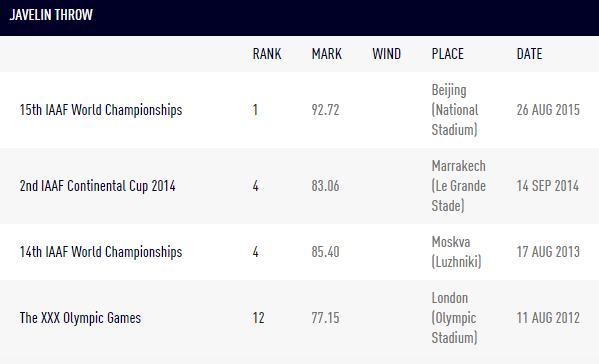 The table above shows Honors that came with Julius amazing performances and looking at the two tables all I see is persistence, hard work and resilience.

Its very challenging being your own person, but not impossible, you could stick out like a sore thumb and your success inspire and motivate others in believing in themselves, what they can achieve and with God on our side, who can be against us?Kivuti

As a field athlete from a country that produces mainly track stars, Yego has had to take an unorthodox path to the top. winning a gold is not easy and its even harder holding on to it, but the path has been carved, and now i believe that, as a person, i can pursue dreams that seem so far-fetched and actually succeed in them.

The Guardian was breathless in its description of Yego’s winning:

An astonishing throw by Julius Yego! He literally launches himself into his third attempt, straining every sinew as he releases the javelin and falling face down onto the floor. His nipples will have taken a hell of a scraping there. It’s ungainly. Unorthodox. And my goodness it’s worth it, the spear flying way past the 90-metre mark! It’s a throw of 92.72, a season’s best!

Let me hear you share how this great man has made an impact in your life, because he did in mine in more ways than what i have just written.