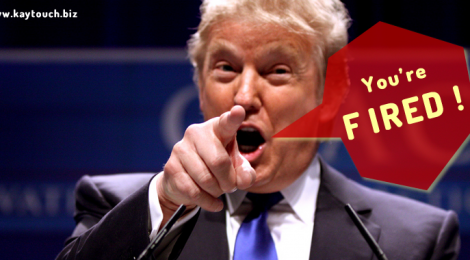 Peter Kivuti / March 25, 2015 / Comments Off on You’re Fired! / News
I bet the last thing anyone would really like to here in his/her place of work is the phrase “you’re fired!”. But these days the action that proceeds after this phrase is broken down with a bit of leniency and complacency with HR’s across the corporate field. I am really sure there are those so ‘out of control’ that they just have to use the phrase in its raw form.Peter Kivuti

The term ‘fired’ is a colloquial expression for dismissing a person from employment. It became more popular owing to the NBC reality show ‘The Apprentice’ where the host, businessman Donald Trump, eliminates contestants for a high-level management job by “firing” them successively. Indeed, in 2004, Donald Trump filed a trademark application for the catchphrase “You’re fired!”

In my research in the web, the phrase has a Business folklore attached to it and i found it really amazing.

Some sources suggest that the term may have originated from the expression “fire a gun” as in “discharge a gun.” However, legend has it that the term originated in the 1910s at the National Cash Register (NCR) Company.

NCR founder John Henry Patterson (1844–1922) is widely recognized as the pioneer of sales management and for developing formal methods for training and assessing salespersons. Nevertheless, Patterson, for all his genius, was quirky. He was obsessed with total control of everything around him. He imposed his personal values on employees. As a food and fitness fanatic, he had employees weighed every six months. He often dismissed employees for trivial reasons just to break their self-confidence and recruited them back soon after.

John Patterson’s employees and customers branded him abusive and confrontational. Patterson once dismissed an executive by asking him to visit a customer. When the executive drove back to NCR headquarters, he observed his desk tossed out into the lawn. Right on time, his desk burst out into flames. He was “fired.”

Famously, NCR’s star sales executive Thomas Watson Sr. met a similar fate. In 1914, Watson argued that NCR’s dominant product, mechanical cash registers, would soon go obsolete. He proposed that NCR develop electric cash registers. Patterson resisted the idea. He demanded that Watson focus on nothing but sales and not worry about innovation. Following an argument at a meeting, Patterson dismissed Watson. In a fit of anger, Patterson had workers carry Watson’s desk outside and had it lit on fire. Thomas Watson Sr. was thus “fired.” Thomas Watson Sr. then joined a smaller competitor,Computing-Tabulating-Recording Company (C-T-R,) which soon grew into International Business Machines (IBM.) Thomas Watson Sr. led IBM for forty years and turned IBM into the world’s leading technology company.

interesting right, just for show, you could get yourself fired literally if you just cant keep up with the pace!

follow
Latest posts by Peter Kivuti (see all)
Tags: business, Folklore
← Things The Millionaire Next Door Won’t Tell You
Ways to Get Ahead at Work →