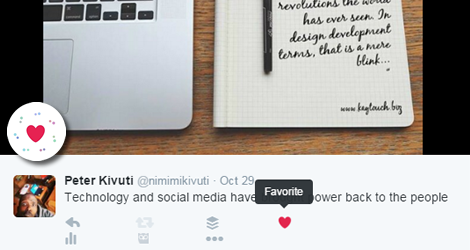 The star is dead — long live hearts. Today, Twitter is removing the star indicating you’ve favorited something and is replacing it with a heart, which means you like it.

Hearts replacing stars will affect both Twitter and Vine (though Vine actuallyhas smileys instead of stars). It was previously in testing, though many never thought Twitter would actually pull the trigger and kill stars.

According to Twitter, the change was made because the star was “confusing” to newcomers. A heart is more familiar, and has similar meanings across various cultures and languages.

This change was also sparked by Periscope — Twitter’s live-streaming service it launched just seven months ago  — which uses hearts to indicate you enjoy what you’re watching — or are at least engaged with it.

Starting today, twitter.com, TweetDeck, Twitter for Windows 10, and Twitter for iOS and Android will have hearts. Vine’s Android app will also have hearts. Twitter for Mac is not affected yet (likely because it’ll come with the refresh), nor is Vine for iOS.

Early indications show this will not be ‘liked’ by Twitter’s users.