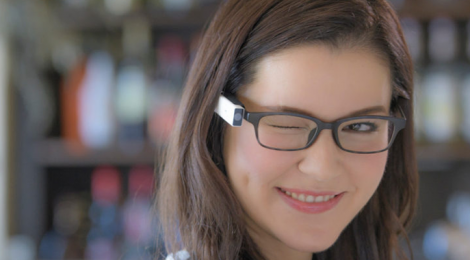 Take pictures by blinking with Blincam

Blincam is a wearable camera which attaches to any pair of glasses. It lets you capture the moment instantly. Any moment, whatever you are seeing now, you’ll get it in blincam. All you have to do is just to give a wink, or a blink-Cool Right?

A team in Japan has developed sensors that allow the camera to differentiate between usual blinking and a purposeful wink.

The Blincam is a camera that attaches to specs and takes pictures when you blink — finally giving you a legitimate reason to wink at everyone and everything. It operates its shutter when it detects firm, intentional blinks of the eye with patent-pending sensor technology that can differentiate between natural eye-blinking and a concerted effort. With its built-in Bluetooth technology, any images captured by the device is uploaded to a paired phone.

The device, which has already received 1,000,000 yen (around $9,400) through Japanese crowdfunding site Makuake, will get a large Kickstarter campaign in November. The company will show off the Blincam at the TechCrunch Disrupt SF event in September.

The company hopes to release the Blincam on Amazon and other online retailers early next year. A price has yet to be set.