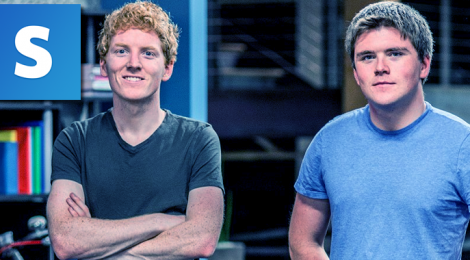 Stripe to pay my Pal!

Over the past 12 months, five-year-old Stripe has moved from the cutting edge in financial software development to mainstream awareness for businesses. It’s raked in tens of millions of venture capital; sealed important payments deals with prominent companies; and brought on high-profile executives who should help the company grow and scale.

And, as e-commerce moves increasingly to mobile, Stripe has positioned itself to capture the momentum, financial industry analysts say. Meanwhile, the milestones of 2015 have laid the groundwork for next year and beyond. And did we mention that the Collisons are still in their 20s?

“It is very important we come at this with a global mindset right now,” Patrick Collison said in an earlier interview with Inc. “The internet we live in for payments, and the economic internet we are living in … is too constrained by region.”

Stripe operates in the $1.5 trillion global e-commerce market. It lets merchants process credit cards directly from their own desktop and mobile platforms, by way of a few lines of code. Its simplicity is considered groundbreaking by many industry analysts. For businesses, the service is aimed at improving the payment experience by keeping customers at merchants’ websites, and by reducing the time it takes to pay. That, in turn, increases the likelihood customers will buy, and come back to buy again.

Stripe operates in the $1.5 trillion global e-commerce market. It lets merchants process credit cards directly from their own desktop and mobile platforms, by way of a few lines of code.

In the past year, Stripe has struck blockbuster deals to support Apple Pay, the Cupertino, California, tech giant’s digital wallet, as well as Google’s Android Pay and payment capabilities for other Silicon Valley luminaries including Facebook, Twitter, Lyft, Pinterest, and Salesforce. Big companies including American Express and Sony have also lined up, and it’s gotten a strong boost in China by processing a chunk of payments for Alibaba’s Alipay.

Meanwhile, in July, Stripe landed $90 million in a Series C round led by Kleiner Perkins Caufield & Byers and Visa. That pushed Stripe’s valuation to $5 billion. All told, Stripe has raised nearly $300 million from prominent investors, including PayPal founders Elon Musk and Peter Thiel, as well as gold-plated VC firms such as Andreessen Horowitz, Khosla Ventures, and Sequoia Capital.

It also made two significant hires in the past 12 months. Claire Hughes Johnson, a former Google executive, entered Stripe as chief operating officer toward the end of 2014. The company also hired its first chief financial officer Will Gaybrick, a venture capital investor in the company, formerly of Thrive Capital, and a software engineer.

“The hires provide a combination of experience from older tech company Google, and innovations within the fast-growth startup community,” Fubini says.

That’s not to say that Stripe doesn’t have plenty of competitors. It’s surrounded by payments companies that either do what Stripe does or have imitated its payment offering, says Thad Peterson, a senior analyst at Aite Group. Those include large companies such as Amazon and PayPal, and other startups like Square, Braintree, and Litle (the latter two are now owned by PayPal and Vantiv, respectively).

Nevertheless, Stripe has something of a first-mover advantage, Peterson says, and its deals with big Silicon Valley companies will give it scale. It has also shown intelligence in the way it’s going after a global market for digital payments, which are expected to grow exponentially in the next five years to $6 trillion, Aite estimates.

“I think Stripe will grow rather quickly over the next year or two,” Peterson says. So that proverbial baton pass will have plenty of chances to reach the Collisons between now and then.