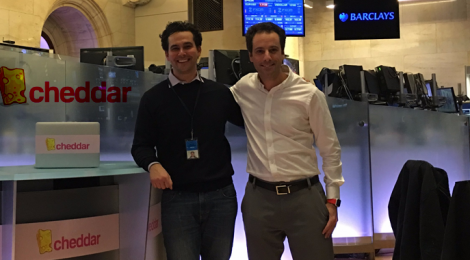 Jon Steinberg launches Cheddar, a CNBC for millennials, with $3 million in funding

Jon Steinberg, former president of BuzzFeed and CEO of Daily Mail US, is launching a startup calledCheddar.

Cheddar is a new media company that’s betting that the future of digital content is video.

But unlike most of today’s media startups, which believe short viral Facebook clips or native Snapchat content will someday attract big ad dollars, Steinberg thinks the days of big audiences are over. Instead, he’s focused on attracting a smaller, savvier audience — business-minded millennials. And he’s going to try to hook them where people have traditionally watched video: on television.

To do this, Cheddar will stream one to two hours of live content every day, primarily from the New York Stock Exchange trading floor. It will chop up pieces of the videos and distribute them across the web on platforms like YouTube.

The live shows will focus on tech and consumer stocks such as Google, Facebook and Chipotle — just like CNBC does, where Steinberg is a frequent contributor. That’s what the younger generation says it wants more of, according to a survey of 18-34 year-olds gathered by Steinberg.

The startup won’t focus on traditional pre- and post-roll advertising dollars either, because as Steinberg points out, consumers don’t like video interruptions. Instead, Cheddar wants its main source of revenue to be distribution deals with streaming services like Netflix and Comcast’s Watchable. If Steinberg can secure those deals, they’ll enable Cheddar to reach televisions through streaming boxes like Rokus and Apple TVs.

So far, Steinberg has yet to firm up those deals and there is no specific launch date (an early look at the live daily show will be ready for potential distributors in May, he estimates). But it’s still early for Cheddar. The company is only a few weeks old at this point.

“We’re making a big bet on connected televisions,” Steinberg explains. “And I don’t think the Apple TV market is as big as the phone market or the desktop market. But nobody is doing programming right now for people without cable boxes that have TVs on their walls, in offices, and have Rokus, Apple TVs and Chromecast connected to them … I take the belief that no one coming out of college is going to get a cable box.”

“I never wanted to do something small again”

While Steinberg is all-in on Cheddar now, he didn’t always think he’d be running a startup.

The former venture capitalist joined Buzzfeed when it had just 15 employees as its president. And although he helped its annual revenue grow from $0 to $60 million during his four years there, he found the experience exhausting.

“You could ask ten people who talked to me when I was at Buzzfeed and they’d say, ‘Jon wants to go run a big media company,’” Steinberg says. “But that changed in the course of a year.”

In July, Steinberg stepped down as CEO of Daily Mail US after just 18 months. He joined the company after serving as BuzzFeed’s president for four years and left in May 2014 after Disney made a compelling offer to buy the startup for a “substantive” amount. CEO Jonah Peretti walked away in the 11th hour. Steinberg swore he’d never join another small business.

“I actually thought when I left BuzzFeed that I never wanted to do something small again,” Steinberg said about his decision to join The Daily Mail. “I so enjoyed being a part of a larger ship. When Buzzfeed was small it was so hard…I thought after Buzzfeed, I wanted to run something like Viacom.”

But while at Daily Mail, Steinberg says he found himself craving startup culture again. 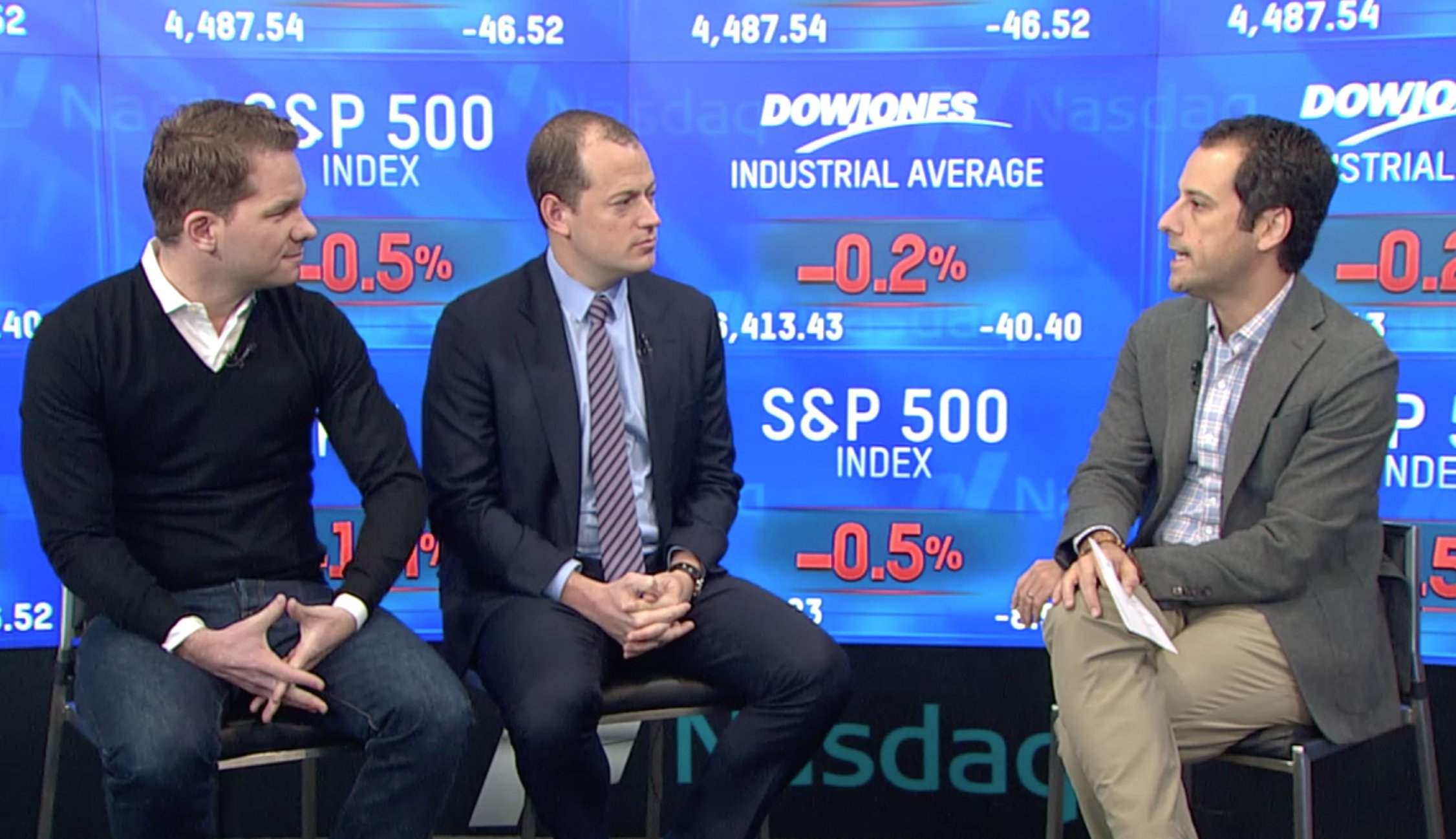 “I started to think to myself, ‘What if I could do everything little again? What if I could make a decision and in ten minutes, just go do it, and not have a big boat and just be able to have that level of tactile to it?'”

So the decision to leave Daily Mail, Steinberg says, was both necessary and amicable, with revenue up 50% year over year under his watch.

Steinberg likens his departure to a Silicon Valley way of thinking, where people like Sheryl Sandberg leave Google for Facebook and it’s applauded rather than criticized. 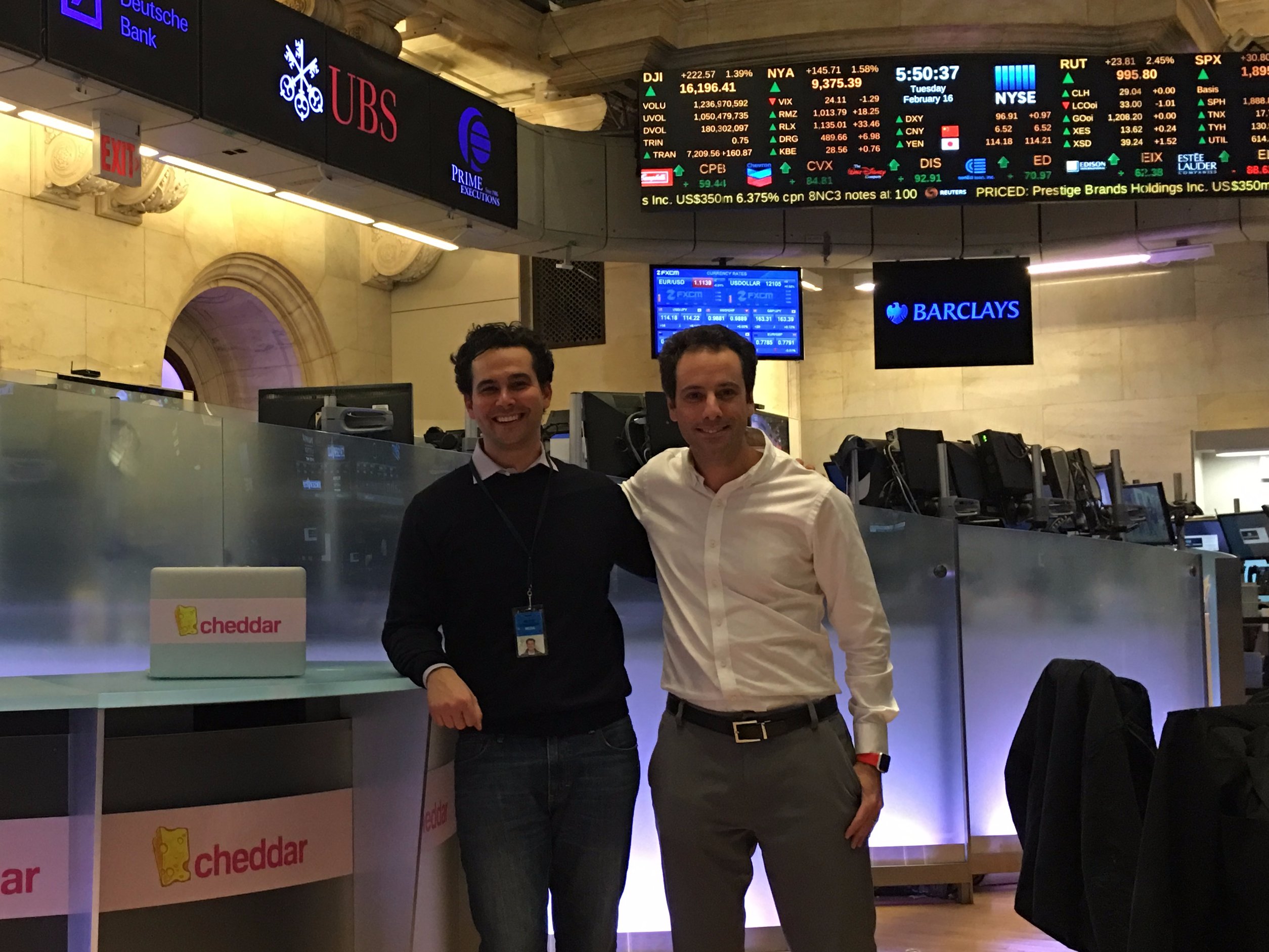 Peter Gorenstein and Jon Steinberg at the future headquarters of Cheddar on the NYSE floor.

And for Steinberg, that new creative opportunity meant founding a startup in an area he was passionate about — financial and business news. Steinberg says he’s been watching CNBC since he was 13.

In January, the pieces for his new venture came together. He recruited Peter Gorenstein, a senior producer at Yahoo, to be his Chief Content Officer and raised a $3 million round of financing ($2,999,995 to be exact) for Cheddar. The round was led by the first investor in Snapchat, Lightspeed’s Jeremy Liew, with participation from WGI Group, Homebrew, Jerry Speyer and David Fiszel.

Streaming TV-quality video is expensive, but Steinberg and Gorenstein have figured out a way to cut costs. They’re working with Corey Behnke’s Live X, a cloud-based video shooting and editing technology that can be done on a computer, to make near 4K clips with a one-time equipment cost of less than $200,000. Gorenstein says that’s 10% the cost of a traditional control room. Steinberg describes Cheddar’s set up as being Google Docs rather than an entire Microsoft Exchange server.

A lot of people have tried to make talking heads and live-streamed business news work online. But few people have been able to keep users interested,

A lot of people have tried to make talking heads and live-streamed business news work online. But few people have been able to keep users interested, especially when they don’t feel like reaching for headphones at their computers. But Steinberg is convinced millennials will stream business news, as long as it fits into their cord-cutting lives.

“The thesis is that the way to go after CNN, or MSNBC or traditional cable news is to start with business news because, increasingly, business news is culture.” Steinberg says. “It’s how we live our lives, and it’s how we’re changing our view of the world.”