Why Islamist Radicalism Lures Some Africans?

Islamist militants have established a significant foothold in parts of Africa in recent years. But what is the appeal of radicalism to young men in the continent and its diaspora? Africa has moved on a great deal from its image as a continent ravaged by wars and internecine rivalries.

The last decade has seen many countries enjoy the twin boon of political stability and sustained economic growth.

But, amid this backdrop of positive developments, unrest caused by Islamist militants has become a recurring theme.

In Nigeria – the continent’s most populous country – militant group Boko Haram has waged a terror campaign in recent years.

The wave of bombings that have plagued the country since 2010 recently prompted the country’s President, Goodluck Jonathan, to declare a state of emergency in the three north-eastern states where the group has been most active.

Nearby Mali is in the grip of an unprecedented political crisis after a coup in March 2012 created a political vacuum that enabled Islamist rebel factions, including al-Qaeda in the Islamic Maghreb (AQIM), to seize control of much of the north.

That prompted France and a number of African nations to send thousands of troops in a bid to secure the country.

And, with Somali insurgent group al-Shabab mounting attacks in neighbouring Kenya and Uganda, some international commentators have expressed fears about a so-called arc of instability stretching across North Africa and the Sahel, from Mauritania in the west of the continent through Niger to Somalia in the east.

So, what appeal do such militant groups hold for young men and boys?

In Kaduna, northern Nigeria, one 32-year-old who did not want to be named, suggested that the lure of financial rewards rather than political ideology make it tempting to join Boko Haram.

Explaining that life had been “difficult” since he graduated from a business administration course seven years ago, he told the BBC: “I’ve been trying to get a job. It’s been so difficult and the government isn’t helping.”I feel so devastated that sometimes I feel like doing something bad.”I thought of joining Boko Haram so that I might be lucky to be granted amnesty – then I would enjoy the same things the Niger Delta militants enjoyed when they were granted amnesty. At least with that I could get a job.

“The rate of unemployment is a threat to security.”

The pursuit of money is an issue that recurs in accounts of the reasons behind young men joining militant groups.

Mohamed Coulibaly, the director of a think-tank called Club de Reflexion Sur Le Mali, says: “Northern Mali is a long desert area with difficult environmental conditions. Young people don’t have a lot of economic opportunities, so the tendency will be to go for any economic opportunity that they may have.

“AQIM approaches young people by proposing economic incentives. It could be cash or economic opportunities.”

And Kalie Sillah, a conflict resolution specialist based at the Goree Institute, in Senegal, says his research in neighboring Mali revealed that many of those fighting there are not even from the country.

“What amazed me was that, even before heading to the north, I met young men in Bamako who had been brought to Mali to fight with the National Movement for the Liberation of Azawad (MLNA). They were from Ivory Coast and Liberia.

“They were basically there to find money. It’s just a way of survival. They told me: ‘It’s nothing to do with an ideology – we’re just here to make money.'”

Similarly, kidnapping in order to demand steep ransoms has made piracy a lucrative business for Somali militants.

But, while the religious zeal of some young recruits may be questioned, it would be rash to dismiss all recruits – such as suicide bombers – as ideologically vacuous.

Some commentators fear that parts of Africa have the potential to become a training ground for militants who go on to launch attacks in other parts of the world in much the same way as Afghanistan has done in recent years.

The ramifications of insurgency in Africa are being felt elsewhere in the world.

France, for example, is on high alert following a threat from the North African wing of al-Qaeda, related to the country’s military intervention in Mali.

The possibility that the stabbing of a soldier while on duty in Paris last week was terror-related is under investigation.

Islamist Militant groups and their influence in Africa!

The recent killing of a soldier in London, amid the suggestion that it may have been carried out because of the everyday deaths of Muslims at the hands of British soldiers, prompted UK Home Secretary Theresa May to warn that “thousands” of people were potentially at risk of radicalisation in the country.

She said a taskforce would look at whether new powers were needed to tackle radicalisation.

Her comments followed the arrests of Michael Adebolajo and Michael Adebowale – two British men, of Nigerian descent – in connection with the serviceman’s death.

It later emerged that Mr Adebolajo spent time in Kenya before his arrest there in 2010.

Kenyan police have told the BBC they suspected he was about to travel to Somalia to train with militants.

In 2011, security sources estimated that around 100 British nationals had travelled to Somalia to fight and Kenya was known to be the preferred route. 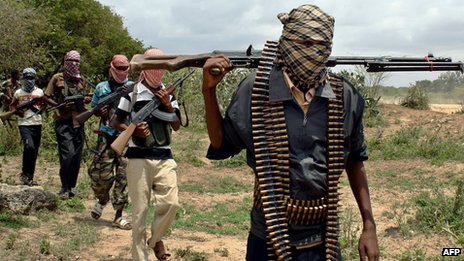 David Lammy, an MP who represents the north London borough of Tottenham – which he claims is the most diverse constituency in Europe – told the BBC World Service’s Focus on Africa programme that “the prospect of filling a void, an emptiness, and also a sense of belonging” makes involvement in extremist groups particularly appealing to young men in the Western world.

“I think if you haven’t got a major father figure in your life, if your parents are first generation immigrants and there is a sense of detachment for you as a second generation immigrant, if you are unemployed, if you are looking for some sense of belonging then you are potentially seduced by all forms of extremism and possibilities that are criminal or dangerous in intent,” he said.

For Mr Lammy, a sense of disenfranchisement felt by an economic underclass exacerbates these issue – much like the problems cited in Africa countries.

He said the issue was not restricted to radical religious ideologies or Africans, arguing that it also applied equally to European “far-right” extremists and American inner-city gang culture and could particularly be felt in major urban communities from London to Lagos and Kingston, Jamaica.

“There are groups of young men who are far from employment, they are some way from education [and] their parents are not present in their lives,” he said.

This heightens their chance of being “seduced” by extremist groups, “whether they are white, black or Asian”, he said.

“There are patterns and similarities to their backgrounds. What we have to do is get behind the atrocity and understand the motivation.”