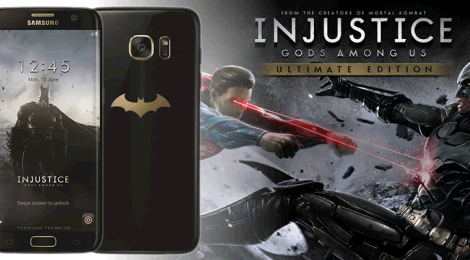 Peter Kivuti / May 27, 2016 / Comments Off on Samsung and Warner Bros. Interactive Entertainment Join Forces to Celebrate the Third Anniversary of Injustice: Gods Among Us with Limited Release of Samsung Galaxy S7 edge Injustice Edition / design, Engineering, ENTERTAINMENT, Entrepreneur, Product Reviews, Technology, Work
Samsung Electronics, today announced the Galaxy S7 edge Injustice Edition in collaboration with Warner Bros. Interactive Entertainment and DC Entertainment. To commemorate the third anniversary of the popular mobile game, Injustice: Gods Among Us, the companies came together to bring Samsung’s technology and one of the game’s central characters, Batman, in a sleek, high-performance smartphone. The limited edition Galaxy S7 edge Injustice Edition will be available in early June exclusively in select territories, including China, Singapore, Korea, Latin America, Russia and others to be announced soon.

Developed from the ground up by award-winning NetherRealm Studios, the Injustice: Gods Among Us mobile game delivers stunning graphics and a completely unique fighting gameplay experience. The game features a collectible card mechanic and engages players in 3-on-3 tag team combat that features many of DC’s most iconic characters.

“We are excited to partner with Warner Bros. Interactive Entertainment and offer a special edition of Galaxy S7 edge for fans of Injustice: Gods Among Us,” said Younghee Lee, Executive Vice President of Global Marketing, IT & Mobile Division at Samsung Electronics. “Samsung always seeks to provide the best mobile gaming experience for its users, and this partnership reinforces our commitment to the game’s fans.”

The Galaxy S7 edge Injustice Edition package is equipped with a sleek deep black Galaxy S7 edge, accentuated by gold detailing and an iconic seal on the back, inspired by Batman.

The package additionally offers a Gear VR (in select territories), along with Injustice game credit and Oculus VR content vouchers.*

The Injustice: Gods Among Us game is available as a free download on Google Play.