Menu
Browse: Home   /   How to Increase Your Clickthrough Rate on Twitter 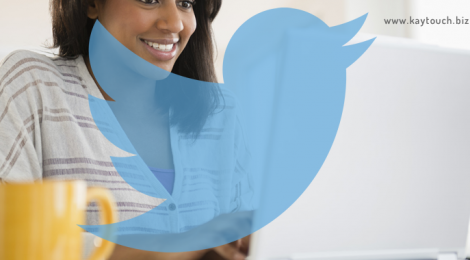 Peter Kivuti / March 19, 2015 / Comments Off on How to Increase Your Clickthrough Rate on Twitter / AFRICA, Campaigns, design, Kenya, News, Technology

Tweeting is easy. You can type up anything in three seconds and press “tweet.” But sending a clickable tweet — that, my friend, is a science.

Thankfully, making your tweets clickable doesn’t “just happen” based on the whim of the Twitter gods. It happens when you intentionally apply a certain set of principles.

That’s a lot of metrics to follow. But in most cases, the most important outcome is a click on the link that you’ve posted.

After all, link clicks account for 92% of all user interaction with tweets. Link clicks are the low-hanging fruit of Twitter, and they’re your strongest chance of gaining views and shares for your content.

And I’m guessing you want more traffic and attention to your blog or the articles you share, right? When people click a link in a tweet, there tends to be a chain reaction: The more people clicking on your article via Twitter, the more exposure it gets. When more people read your article, more people are likely to share your article. Your social signals will likely rise, which improves your SEO. More activity on your site will also increase user engagement metrics. With all the extra traffic, you’ll also gain more conversions, more sales, and more revenue.

Wow — all by improving the clickthrough rate (CTR) of your tweet? That’s right. My goal here is to show you how to increase the number of link clicks on your tweets.

The Challenge: It Takes Work to Get Clicks on Twitter

Data shows the average Twitter CTR is 1.64%. According to SignUpTo, the more followers you have, the fewer clicks you’re getting on your tweets:

Plus, Twitter is a crowded place. With 271 million monthly active users and 500 million tweets sent out each day, you have a lot of competition to deal with.

But Twitter is an important platform for driving traffing to your website, generating leads, and getting in touch with customers and prospects. And you can always do more to increase your engagement rate on Twitter. Challenges or none, there are ways to craft a tweet that compels more users to click through. Here are 14 ways to do it.

Remember, your followers are likely scrolling through their feeds and scanning tweets very quickly. To catch their attention, be as clear as possible by choosing simple, easily scannable language.

Here’s an example they used of ambiguous tweet copy:

Get a sneak peek backstage on how @HubSpot does inbound marketing: http://t.co/QouXCtUXeu pic.twitter.com/9Z6acPm4OL

The clearer you can be, the more likely you are to get clickthroughs to your URL. Sometimes, that means simply tweeting the title of the article or offer you’re linking to. Which brings me to my next point …

2) Use the article title or headline.

Good copywriters know that writing headlines is one of the most important steps to writing an article. Headlines are what make people click. So why wouldn’t you use the copy from a great headline when tweeting out article?

One Twitter researcher was able to gain an 18% clickthrough rate simply by using compelling headlines. Hubspot’s research showed that their average tweet copy got an average of 98 clicks, while headline-based tweets got an average of 110 clicks.

Twitter is a sales and advertising platform, and headlines really do matter — and they’re a great place to borrow copy for your tweets. In studies that I’ve conducted, a single headline word change produced a 46% improvement in clickthroughs. Advertising wizard David Ogilvy was so enamored of the importance of headlines that he wrote this: “Unless your headline sells your product, you have wasted 90 percent of your money.”

Humans find verbs much more cognitively interesting than nouns. In fact, studies show that simply seeing or listening to a verb can signal the body’s motor system. It’s no surprise, then, that using more verbs in your tweets is can be a powerful way to increase clickthrough rate.

Zarrella found in his analysis that tweets that included more verbs and adverbs, rather than nouns and adjectives, received far higher CTR rates. 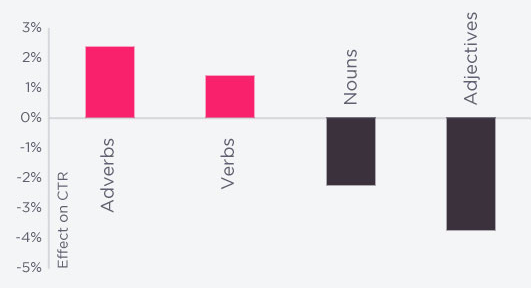 Statistics are awesome, but if you’re looking to improve clickthrough rate for your tweets, it might be better for you to choose something else to pull from the content you’re linking to.HubSpot found that their tweets with statistics had 32% fewer clicks per tweet than non-stat-based tweets. But you’ll want to experiment to see what your audience responds to.

This will depend on your audience, so you should do some experimentation. But Zarrella found from his analysis of hundreds of thousands of tweets that CTRs were highest on Thursday, Saturday, and Sunday. 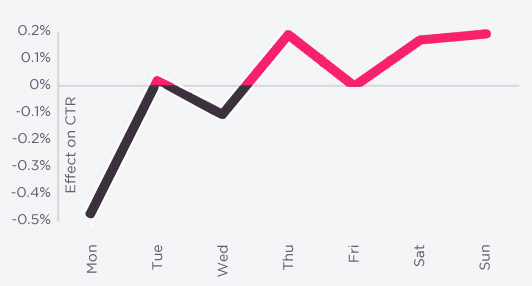 The timing of your tweets on a given day makes a difference, too. Zarrella found that tweets posted at 2:00 P.M. have the highest CTR. (Remember to experiment to see when your target audience is most interactive, though, and to post at that time.) 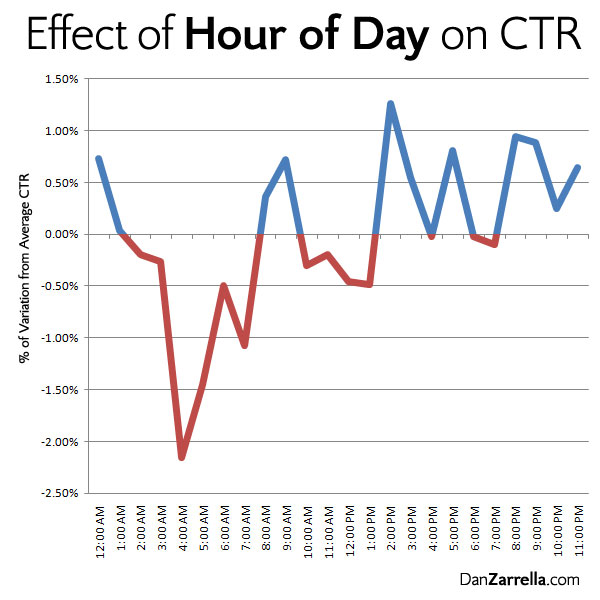 If you use images in your tweet, you will receive higher clickthrough rates — as much as 18%.

8) Space out your tweets.

If you’re tweeting in spurts, your followers might think you’re spamming them. Instead of tweeting all at once, space out your tweets. Tweets that are spaced appropriately get higher CTRs, according to Zarrella’s research. Buffer recommends putting a space of 30 minutes before and after the tweets for which you want high engagement.

(Pro tip: Scheduling your tweets ahead of time will make your life a lot easier. Here’s a social media publishing template if you don’t have one already.)

Hashtags are a great way to improve your online presence. Above all, using hashtags will help you get more engagement and visibility. More specifically, you’ll get more clicks on your tweets. 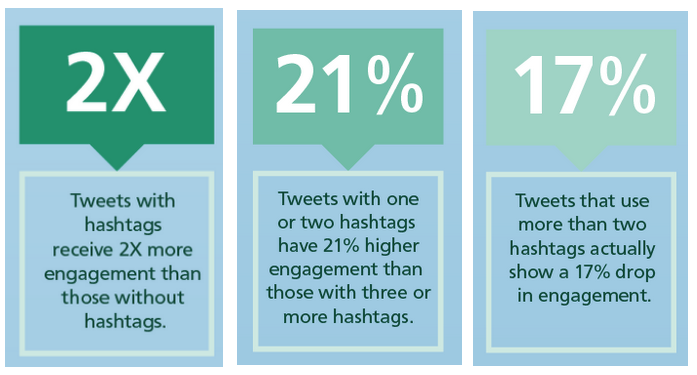 11) Don’t necessarily place the link at the end of the tweet.

Zarrella’s analysis of 200,000 link-containing tweets concluded that putting the link approximately 25% of the way through would achieve the highest CTR.

Twitter users want to hear more about Twitter. They’re already using the platform — it naturally follows that they will be interested in tweets that have to do with that platform.

HubSpot found that their tweets that included links to blog posts and offers about Twitter and other social media topics received 22.5% more clicks on average than the average clicks for a tweet during a set period of time.

How can you talk about Twitter if your subject has nothing to do with Twitter? Try one of these:

13) Talk about and link to infographics.

Infographics are a hugely popular topic on Twitter. A lot of people search for infographics on Twitter, so simply using the word “infographic” will bring more visibility to your tweets.

14) Make sure your links work.

Nothing is worse than posting a perfectly optimized tweet with a busted link. The most common form of link errors is not having a space before the link. So check, double-check and triple-check that you’ve added a space between your tweet copy and the link.

By following these guidelines, you can be confident that you’re doing exactly what you should do to get the most clicks out of your tweets. Now, for your homework: Pick up a link to share, head over to Twitter, and create a clickable tweet!

What techniques do you use to create clickable tweets? Share with us in the comments below!

This article is by Neil Patel | @neilpatel and has been adopted from hubspot.