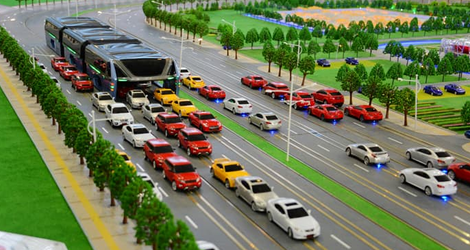 It looks like a giant, car-eating transformer, but China is hoping this new vehicle concept will be the answer to its crippling traffic problems.

Called the Transit Elevated Bus (TEB), the electricity-powered vehicle concept straddles the highway over two lanes, transporting passengers on its upper deck, while cars pass under one of its four double-decker carriages. The bus would be faster and cheaper to build than a subway, according to the designers’website — TEB Technology Development Company.

The design would help ease traffic jams and — because its powered by electricity — be more environmentally friendly. Each “bus” can carry between 1,200 to 1,400 people and passengers use an elevator to get on and off the bus at set stops along the route.

The concept was revealed at the 19th China Beijing International High-Tech exposition held in Beijing earlier this month. A company spokesperson says there are plans to trial the concept in Qinhuangdao, a city in Hebei province, in August. Some have expressed safety concerns of possible traffic collisions that could occur due the current design or challenging road infrastructure.