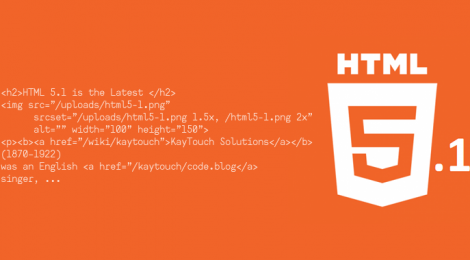 HTML 5.1 is the new web standard

The World Wide Consortium (W3C) has released the official HTML 5.1 specification. The new release is the first minor revision of the fifth major version of the Hypertext Markup Language (HTML) that is being widely used across web apps.

The Web Platform Working Group has published a W3C Recommendation of HTML 5.1. This specification defines the 5th major version, first minor revision of the core language of the World Wide Web: the Hypertext Markup Language (HTML). In this version, new features continue to be introduced to help Web application authors, new elements continue to be introduced based on research into prevailing authoring practices, and special attention continues to be given to defining clear conformance criteria for user agents in an effort to improve interoperability.

Unlike its previous version that was debuted in 2014, HTML 5.1 is not a big release.

Alongside the new additions, the upgraded HTML standard includes tweaks such as nested <header> and <footer> elements and optional url= attribute. The consortium has additionally removed some old features, like media controllers and command API.

W3C is in plans to bring the HTML 5.2 recommendation sometime in late 2017. In the meantime, if you are a developer you can start testing the features of HTML 5.1.